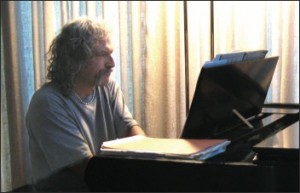 My father was trained as a classical pianist—he had a certificate from Juilliard. He was also a well-known mathematician, and had a brilliant mind. By the time he died, a few years ago, with Alzheimer’s, little remained of the person he had been.

I started writing these poems in the last year of my father’s life. I wrote them, not as a tribute to him, but to help me make the most of our relationship in the little time we had left. I also wrote them to try to make sense of his experience with Alzheimer’s and dementia, and, as language failed him more and more, to find other ways to communicate with him. Touch was one. Music was another. And when he hummed along with me as I played his piano, it was clear—even though so much of who he had been was gone—that he could still “make music”, and, for the first time, make it with me.

Others have said it is also a useful book—useful because, when dealing with significant life changes, we often feel alone; we need to know others share the same feelings—grief, joy, anger—all the emotions that come with losing a loved one. My hope is that My Father, Humming does that.